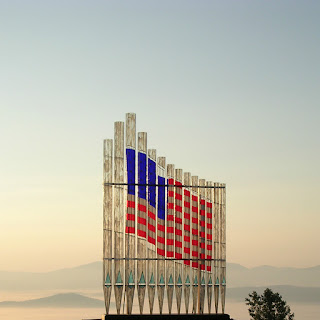 One day he was enjoying a gin and tonic at the top of the World Trade Center...

The next thing you know, that spot was a smoking pile of ruble and heartache.  That began a personal quest for my pipe organ building husband. He wanted to build an instrument with a pipe for each individual lost that day - to restore their voices to the earth and bring light to their families. And he wanted to make each unique pipe from glass, to share light, color, breath AND sound. But that had never been successfully done, though other folks had tried.

He created a World Trade Center Memorial Proposal to make his vision a reality.  His idea wasn't chosen, nevertheless, he went on to build the Wilhelmy American Flag Glass Pipe Organ, a complete working organ with a rank of 14 glass organ pipes.

My handsome Austrian, Xaver Wilhelmy, is the first in the world to create pipe organ pipes from glass. And he created the first prototypes right at his dining room table. His young daughter chose the colors for some of those early pipes.

He simply wanted his work to bring comfort to those who mourned.

Our business name is German for "Gift of Glass"